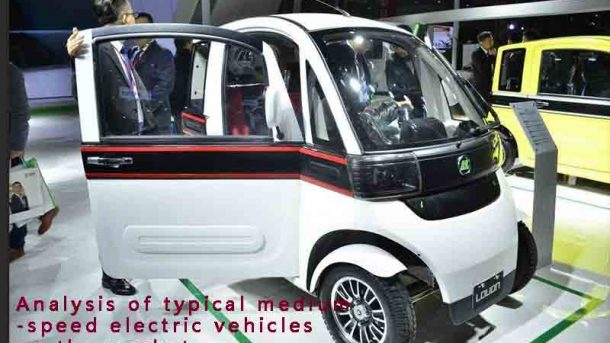 For the time being, a vehicle with a speed of 20~80km/h is defined as a medium-speed vehicle. Motorcycles and various special vehicles used for transportation belong to this category. The former is similar in appearance to electric bicycles but has higher self-weight, speed and power, while the latter is actually a car but with lower speed. Such vehicles are widely used and have many varieties. In the past, most of them were fuel vehicles, but now most of them have been changed to electric vehicles, but solar electric vehicles are rarely seen. The structure and emission comparison of several vehicles are shown in Figure 1. It can be seen from the figure that the fuel vehicle has a complex structure and has more carbon emissions. Compared with the fuel vehicle, the electric vehicle can achieve zero emissions in the place of use, but it needs to be charged with the mains electricity, which is less To achieve energy saving and emission reduction, the development of solar electric vehicles is an inevitable trend. There are two ways to use solar energy. One is to build a solar charging station to replace the mains charging station to charge the electric vehicle, and the other is to use the solar panel arranged on the roof to charge the electric vehicle.

(3) The technical parameters and changing laws of several medium and small power vehicles. The technical parameters of several vehicles are compared in Figure 3(a). The maximum speed of several vehicles is 25km/h, the power is about 4kW, and the vehicle mass is about 800kg. Therefore, the solar electric vehicle we developed is positioned at a power of about 4kW. Each type of electric vehicle is a series, and the self-weight and power requirements are designed based on different loads. Taking the sightseeing vehicle with the largest load change as an example, the vehicle length, vehicle weight, and vehicle plane increase with the increase of the number of passengers as shown in Figure 3 (b). ), but the speed of self-weight increase is much smaller than that of the load. The patrol car also follows this rule. The comparison of its parameters is shown in Figure 3(c). The power increase speed is much smaller than the length and weight of the vehicle. According to other data, the power of the sightseeing car with a capacity of 2 to 5 people is 3kW, that of 6 to 8 people is 4kW, and that of 21 people is 6kW. Therefore, reducing the weight is the fundamental way to increase the load and increase the speed. From the data analysis, it can also be concluded that with the increase of the plane area of ​​the body, upgrading to a solar car will increase the energy input by solar energy.

(4) An example of an upgradeable solar car. At present, the power of special vehicles such as RVs, refrigerated vehicles, and engineering vehicles is mostly provided by gasoline engines or diesel engines, as shown in Figure 4(a) and (b). Most of these vehicles are box-type vehicles, which also require more energy when working. , so it is most suitable for the development of solar electric vehicles. The electric vehicle in Figure 4(c), the power parameters are 4.2kW/48V/210A h, the weight of the vehicle is 1015kg, the load is 1000kg, and the continuation is 80km. This is a steel medium-speed electric flatbed vehicle. The solar box and solar controller are installed, and the output can directly supply power to the motor and battery of the vehicle, that is, it can be transformed into a solar electric truck. If the internal facilities are further increased, it will become a variety of special vehicles, such as tourist RVs, thermal vehicles, office vehicles, and emergency vehicles. vehicles and various engineering vehicles.

Read more: What is the calculation of battery capacity and solar container body battery energy system?