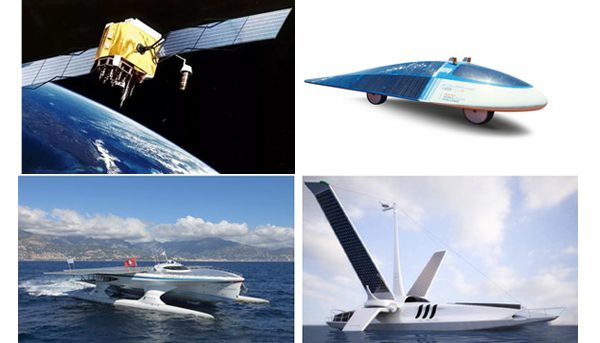 (1) Application in aerospace engineering. Because of the small shielding and low flight resistance, the vehicle flying in space has good solar energy application conditions. The spacecraft is launched into space orbit by a rocket and then opens its solar wings to absorb solar power and supply it to the spacecraft. At present, spacecraft solar energy prefers high-efficiency, high-radiation-resistant, high-temperature-resistant high-efficiency silicon and GaAs, GaAs/Ge, secondary or tertiary GaAs/Ge solar panels. The solar panels use a large number of advanced composite materials to improve the photoelectricity. Reduce quality while reducing conversion efficiency. The use of solar energy for manned spacecraft in China is shown in Figure 1. Figure 1 (a) shows the appearance of the Shenzhou 5 manned spacecraft, and Figure 1 (b) shows the docking of the Shenzhou 9 spacecraft with Tiangong 1 in space.

(2) Application in aviation engineering. Solar-powered airplanes have not yet seen commercial use. Figure 2(a) shows the test flight of the “Challenger” funded by NASA. It stopped in Nanjing and Chongqing during the global test flight in 2015. Figure 2(b) is the solar-powered “Apollo” aircraft, made of carbon fiber composite materials. The entire aircraft weighs only 590kg, the fuselage length is 2.4m, and the movable wings reach 75m when fully extended. The fuselage is equipped with 14 propellers. The power comes from 65,000 solar panels on the wings, and the ground personnel fly remotely through a computer.

(3) Solar powered airship. The solar powered airship is filled with light gas in a large body or wing, and its structure is shown in Figure 3. Light gas can provide most of the lifting force for the airship. The power is provided by a large number of solar panels covered on the body or wings. It does not need runways, airports or launch towers during operation. This kind of aircraft can complete medical emergency and wild life in remote areas. Biological monitoring, military reconnaissance, and the task of transporting heavy cargo. The size of the airship can be large or small, as small as a small car; the largest is named “Nanuq”, which can transport 33 tons of cargo over long distances.

(4) Solar powered ships. At present, the power of ships is mainly provided by fuel, but there are also some development examples of using solar energy as power. Figure 4(a) shows the trial operation of the world’s largest solar-powered ship “Planet Sun” in Kiel, Germany. The hull is 31m long, 15m wide, and weighs 60t. A 500m² solar panel is installed above to provide power, and the maximum ship speed can reach 26km/h. Figure 4(b) is a fully automatic electric boat developed by Yichang Ship Management Bureau. From the structural point of view, the hull is larger, and the roof is curved and herringbone, which can form a larger light-receiving area and obtain more solar energy. If the electric boat is changed to a solar-electric boat, this will be the development of fully automatic solar-powered electric boats. The development of the ship opened up a new path.

(7) Solar offshore engineering. Solar energy is widely used in marine engineering because there are few obstructions around it and the application environment is good, such as solar offshore oil production platforms, solar offshore trestle bridges and solar hydrometeorological signs (see Figure 7).