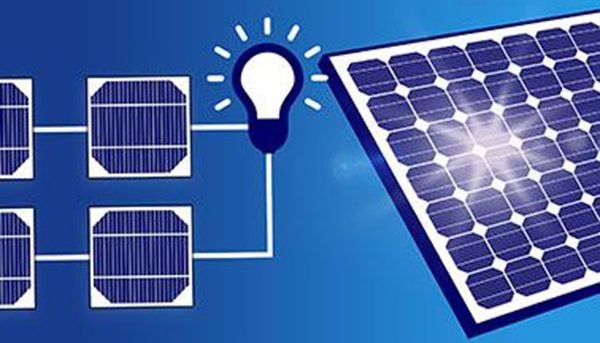 ①The basic principle of photoelectric conversion
(1) The photo-electric conversion phenomenon of semiconductors. The energy absorption coefficient of semiconductors is relatively large, generally above 105cm-1, which can fully absorb light energy and enable electrons with lower energy in the material to jump to higher energy levels. If the leap forward only occurs in the valence band or conduction band, no excess carriers are generated, but energy is exchanged with the crystal lattice, and finally light energy is converted into heat energy. If the absorbed light energy is greater than the forbidden band width of the semiconductor, electrons may jump from the valence band to the conduction band, thereby generating electron-hole pairs and generating unbalanced carriers. The greater the amount of unbalanced carriers, the greater the conductivity The larger, this is the photo-electric conversion phenomenon of semiconductors, see Figure 1.

(2) The photovoltaic effect of PN junction. Semiconductors have P type (holes) and N (electron) types, and the combination of the two forms a PN junction. When the light shines on the semiconductor PN junction and the light energy is greater than the forbidden band width of the semiconductor, electron-hole pairs are generated near the PN junction. Due to the existence of the built-in electric field, a photogenerated potential is generated. If it is connected to an external circuit, a current will appear. As shown in Figure 1(a), it is called the photovoltaic effect, which is the basis for the development of solar photovoltaic cells. The current I1 generated by the photovoltaic effect is
I1=qAG(Ln＋W＋Lp)
In the formula, q——the amount of electron charge;
G-PN junction electron-hole pair generation rate;
A——The area of ​​PN junction;
W-the width of the space charge region;
Ln, Lp-the diffusion length of electrons and holes.

(2) Analysis of ideal equivalent circuit. The ideal equivalent circuit is shown in Figure 2(b). The constant current generated by the incident light, the diode saturation current and the load resistance form a loop. The ideal characteristics of this device are
I=Is(eqU/kT﹣1)﹣IL
Where IL——the intensity of a constant current source generated by incident light (from excess carriers excited by solar radiation);
Is——Diode saturation current;
g——electronic quantity;
k-Boltzmann’s constant;
T-absolute temperature.

(4) Maximum output power: the area of ​​the dotted square in the characteristic curve of Figure 2(d) is the maximum output power of the solar cell, and its expression is
Pm=ImUm≈IL[Uoc﹣(KT/q)ln(1＋qUm/KT)﹣KT/q]

November 1, 2021 by admin Analysis and Application of Solar Energy Characteristics