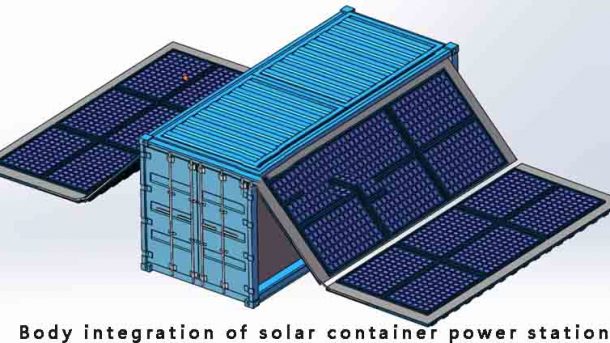 The solar off-grid power station is an independent power station that is self-generated and used independently of the mains. Its box-type structure can install solar panels in the largest area.

(1) Box structure of solar off-grid power station
The box is composed of 16 280W solar panels (see Figure 2), which can output 4480W/48V DC power. It is closed at night and rainy days as a storage room or container, and it is also a car body. When fixing or parking during the day, in order to improve The front face improves the power generation efficiency, and the surrounding solar panels are spread out, which also expands the work space.

(2) Power supply system of solar containerized off-grid power station
The output energy of the solar cell changes with the change of the light intensity. The solar controller must be used to drive the DC electrical appliances with a stable output voltage of the solar controller, or to charge the battery for the use of the DC electrical appliances in cloudy and rainy days, so as to achieve the purpose of all-weather work. If you want to supply power to AC appliances, you also need to connect to the inverter. In order to monitor the operation of the system, there is also a computer test system. The power supply system is shown in Figure 3. The solar system can be used to charge the battery and can also be used off-grid as a power source.

(3) Connection of solar energy system
The composition and wiring connections of the solar energy system are shown in Figure 4. The connection and wiring are explained in more detail in the figure. The solar panel adopts 8 parallel and 2 series input to two solar controllers in parallel, providing 48V DC output for DC appliances and charging storage for the battery, and then providing 220V through the inverter. AC power is used for AC appliances.

(4) Solar system components and technical parameters
The components and technical parameters of the solar system are shown in Figure 5. Among them, (a) (b) (d) are selected for this system. For example, a semi-flexible 300W PC solar panel is selected for the solar panel. The power of the same size can be increased from 4.48kW to 4.8kW, and the weight can be reduced from 368kg to 96kg. but close. The lithium battery in (c) has excellent performance, complete parameters, long life and light weight, but it is more expensive. This system selects the maintenance-free lead-acid battery with the lower price and the most use. The reasonable arrangement of the components of the solar off-grid power station has a great impact on the lightweight and cost-effectiveness of the entire vehicle, so the optimal design of the system is particularly important.

The solar electric vehicle is a vehicle-mounted solar off-grid system that can be applied to various vehicles. The system can also be used in household or building rooftop power stations, workshops, laboratories, electric vehicle charging stations, planting or aquatic greenhouses in areas without electricity or lack of electricity. The power can be large or small, and the installation can be arranged as needed to meet various requirements.

The construction of solar charging stations has different structures and different power requirements, but the composition of the system is the same. In areas with electricity or sufficient power, it is best to use a grid-connected system. The difference between a grid-connected system and an off-grid system is that a “grid-connected inverter” integrating control and inverter is used to directly convert solar energy into electricity with the city. The alternating current with the same voltage is connected in parallel with the mains grid through the electricity meter, and it is connected to the mains. If there is any surplus, it will sell electricity, and if it lacks, it will buy electricity. It does not need to use batteries and can be directly used for various existing AC appliances. The initial construction cost and use The cost is much lower.

(2) Solar Container Vehicle
The types of solar container trucks are shown in Figure 7. (a) in the figure is a fixed solar off-grid power station; if four wheels are installed at the bottom, it becomes (b) an external towed solar source vehicle, which can be driven by manpower or externally driven by an external vehicle; (a) Putting it on an electric flat car, it becomes (c) vehicle-mounted solar energy vehicle; if the solar container body and electric vehicle are integrated into one, it becomes (d) self-propelled solar energy vehicle, which is used as energy drive The working equipment on the vehicle, such as solar energy + electric vehicle + operation equipment, becomes a variety of special solar vehicles.

(3) Solar self-propelled containerized electric medium-speed vehicle
Combining the above-mentioned solar container with the cab and chassis of a 4kW electric vehicle becomes a solar powered self-propelled vehicle. For the newly developed container car body, the solar panels are changed to 1×2m polysilicon semi-flexible 300W PC solar panels, the output power can reach 4.8kW, and the vehicle weight can be 96kg, but the price is similar. The computer numerical simulation results of the car are shown in Figure 8. The analysis of the normal operating conditions shows that the vehicle runs stably within the set speed of 40km/h, the maximum speed reaches 83.9km/h, and the continuation can reach 11l.1km (the design mileage is 80km). Good acceleration performance, high battery efficiency and long continuation mileage, stable operation, zero emission, and meet design requirements.