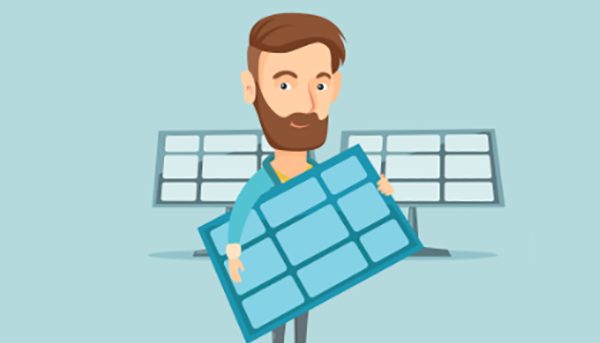 1. Solar cell classification
The classification of solar cells is shown in Figure 1, and their price and efficiency are quite different, so they must be selected according to their usage.

2. Examples and comparison of technical parameters of photovoltaic modules
(1) Rigid sheet-like monocrystalline and polycrystalline silicon photovoltaic modules. Multiple low-voltage and low-current silicon wafers can be connected in series and parallel to form components, ranging from low-power to high-power serialization, with the widest application, the most complete parameters, and the most mature application. Drawing the rigid sheet-like monocrystalline and polycrystalline silicon photovoltaic modules produced by several manufacturers into Figure 2 according to their technical parameters, the basic relationships and basic laws among various parameters can be seen. It can be seen from the figure that the difference between the open circuit voltage and the working voltage within the power of 150W is about 2V, and the current is within 1A. With a power of 200W or more, the voltage increases significantly, and the open circuit voltage differs greatly from the operating voltage, while the current remains basically stable, and the gap between the operating current and the short-circuit current is very small. Therefore, increasing the power of this type of photovoltaic module is mainly achieved by increasing the voltage. The power range between 150W and 200W is the most widely demanded and most used section, showing the characteristics of high voltage and low current. In the high-power section, compared with monocrystalline silicon, the voltage is slightly higher and the current is slightly lower at the same power, and the mass is lighter. Different forms of solar silicon cell modules and solar silicon cell modules produced by different manufacturers may be different, but according to the comparison of the corresponding specifications of the products of several manufacturers, each kilowatt output requires about 8 square meters of solar panels.

(2) Flexible silicon photovoltaic cell modules. Shenzhen Puguang uses imported flexible boards with a conversion efficiency of 20% to 21%, light weight, and thickness as thin as 3mm. The main parameters of Guizhou Dabojin’s flexible solar panels are similar to those of Shenzhen Puguang’s flexible panels. Its conversion efficiency is low, only 19%, but the power can be as high as 490W.

(3) Semi-flexible solar panels. Rigid photovoltaic cells are aluminum-frame laminated glass fiber reinforced plastic substrates, which are widely used to fix large power stations and household rooftop power stations. They can be used independently, but they are of high quality and are also used in solar vehicles, but the weight of the vehicle is increased. Later, a high-efficiency, lightweight and flexible silicon photovoltaic cell module laminated on a soft substrate was developed, which is characterized by small thickness and light weight. This kind of component must be fixed on a flat surface or a curved surface, and it has good bendability, but it cannot be bent sharply at will, so as not to damage the chip. Now it has developed a kind of semi-flexible silicon photovoltaic cell module by adding a layer of PC sunlight back sheet behind the flexible silicon photovoltaic cell module. This semi-flexible solar cell panel can be bent to a certain degree, and has a certain degree of rigidity and greater impact resistance. Strength, can be installed on some frame structures.

(4) Comparison of silicon photovoltaic modules with several structures. The comparison of several battery components is shown in Figure 3. It can be seen from the figure that the flexible and semi-flexible boards are lighter, and the semi-flexible boards are slightly lighter and larger in area than the flexible boards. Converted to generate 100W photovoltaic power, the area ratio of the three types of photovoltaic modules is 0.7/0.7/0.6 ​​(actually 0.665/0.660/0.570), and it is estimated that 1kw photovoltaic power will be 6.65m²/6.60m²/5.70m² photovoltaics. Solar panels, the same layout area of ​​high-efficiency flexible panels generates the most power, but it is not caused by structural factors, but because the photoelectric conversion efficiency of the selected high-efficiency flexible panel cells is about 21%, while the first two are only about 19% . Comprehensive comparison shows that PC board semi-flexible photovoltaic panels have the best performance. The frame structure can be used to replace part of the car body materials to integrate the car body’s power generation.

(2) Integration of energy vehicle body structure. The solar container body composed of 16 280W monocrystalline silicon rigid solar panels is shown in Figure 5. The car body is a stainless steel frame structure. The solar panels use a commercially available single 23kg ordinary panel, with a total mass of 368kg and a total output of 4.48kW. If the semi-flexible PC solar panels of the same size are used, the mass can be reduced to 80kg and the power will be increased. To 4.8kW. In addition, the roof layout is flat, which is easy to collect dust and water and reduce the output efficiency. The small sloped herringbone roof flexible semi-flexible solar panel can be used to facilitate drainage, cleaning and dust removal. It can also increase the area of ​​solar panels. Because the side wall is installed vertically, the power generation efficiency is very affected, so a manual expansion structure is adopted (the test vehicle has been changed to a pneumatic structure). The side wall can be opened for charging and shading on sunny days, and the side wall can be stored at night and on cloudy and rainy days. And shelter from the wind and rain.

(3) Application of solar container car body. The solar container truck saves materials and labor, has a large output power, can generate electricity and can store things, and can be used as a fixed home or working power station, can be used as an external towable power supply vehicle or engineering vehicle, or can be placed on a flat electric vehicle to make a vehicle-mounted power supply A vehicle or engineering vehicle can also be used as a vehicle body with chassis running, driver’s cab, and operation control system to become a self-propelled power vehicle or engineering vehicle.
(4) Photovoltaic battery series and parallel output system. The current, voltage and power required by the power supply object can be composed by selecting the component parameters. Multi-level current and voltage output can be obtained according to different series and parallel combinations to meet different requirements. It can be seen that the selection and assembly of solar panels are very important.

4. Series and parallel combination design
The series-parallel combination design is to perform theoretical calculations according to actual needs, and then select the appropriate solar panels for combination. The calculation method is as follows.
(1) Connect the components in series to get the required voltage.
NS=UR/UDC
In the formula, UR, UDC——the minimum and optimal working voltage of the photovoltaic array output.
UR=UF+UD+UC
In the formula, UF—battery floating charge voltage;
UD—Diode voltage drop (0.7V);
UC—pressure drop caused by other factors.
(2) Daily power generation of photovoltaic modules.
Qp=locHKopCz
Where loc——the best working current of the component;
H——The average daily radiation hours at the installation site converted to standard light intensity,H=2.778/10000×ht, h;
ht——daily solar radiation at the installation site;
Kop——Slope correction coefficient (1.09~1.14 increases from poor to rich);
Cz——combination, attenuation, dust and charging efficiency loss, generally 0.8.
(3) The amount of electricity that should be replenished in rainy days.
Solar energy cannot supply power in rainy and cloudy days, so it has to be supplemented by batteries. Its supplementary capacity is Bcb=AQ1H1
In the formula A—— safety factor (1.1~1.4);
Q1——daily power consumption;
H1——The longest number of rainy days.
(4) Number of parallel components.
NP=(Bcb+NW Q1)/(QPNW)
(5) Solar cell square array power.
P=P0NSNP
In the formula, P0——Rated power of solar cell module.

November 11, 2021 by admin Analysis and Application of Solar Energy Characteristics