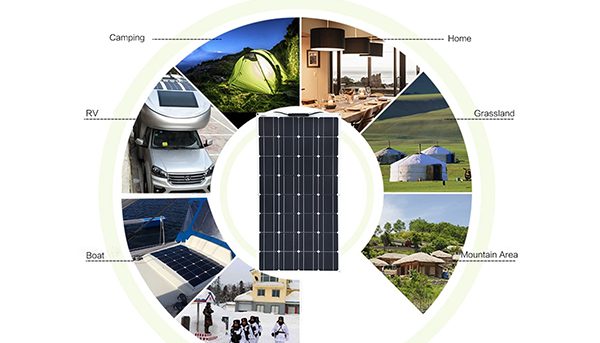 There are many ways to convert and apply solar energy. Its application fields are very wide. It is closely related to the national industrial and agricultural construction. It is the leader of the energy revolution, the foundation of sustainable social development, and an important way for people to improve the quality of life and the environment.

Solar energy conversion and application methods
(1) Light-to-heat conversion. The water pipe coated with heat-absorbing material absorbs the radiant heat of the sun to heat the water and transport it to the incubator for storage for life and bathing. If the sunlight is focused through a lens, the concentrated heat can quickly heat the object to a high temperature, and even melt and weld metal.
(2) Photoelectric conversion. The use of semiconductor material doping to form P-type semiconductor and N-type semiconductor, the two combined into a photovoltaic cell with a PN junction, can output direct current.
(3) Photochemical conversion. Including photosynthesis, photoelectrochemistry and photolysis. For example, the photoelectrolysis cell produces hydrogen to charge the hydrogen fuel cell.

Solar heating system and its application
(1) Solar water heating system. Solar heating system is the most widely used method. In the past, most domestic water heaters used gas or electricity, but now solar water heaters are gradually being used. Its output and market have been growing rapidly. In 2009, it reached 42 million square meters, accounting for 54% of the world’s total, and its social ownership reached 145 million square meters. It can save 21.75 million tons of standard coal annually. Saving 1 ton of coal can reduce 26.20kg of carbon dioxide, 8.5kg of sulfur dioxide, and 7.4kg of nitrogen oxides. In addition to bathing, solar water heaters can also be used for air conditioning and heating. The application system is shown in Figure 1. It can also be used in the light chemical industry. In 2010, the 500t hot water project of Changshu Jinhong Printing and Dyeing Plant was put into operation. It used 44,800 solar collector tubes, the heat collection area was 7,500m2, and the daily supply of hot water at 60℃ was 500t, which met the production needs and saved 200 dollars a year. Ten thousand yuan. Schematic diagram of vacuum rotary guide (solar) raid, cold crack air conditioner, and domestic hot water system

(2) Solar thermal power station. Solar concentrating thermal power generation is shown in Figure 3. It uses a parabolic mirror to focus the light on the heat absorption tube filled with synthetic oil, and then sends the synthetic oil heated to about 400C to the heat exchanger to heat the circulating water, generate water vapor, and drive the steam turbine to rotate to make the generator run to generate electricity .