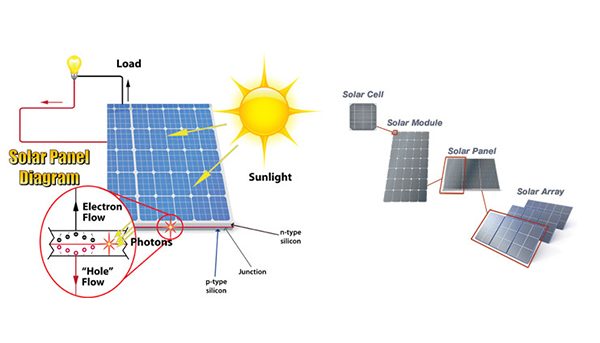 1. Principle of Solar Concentration
The energy emitted by the sun is concentrated on the focal plane through cheap sunlight reflecting mirrors or transmissive mirrors, so that the sunlight energy on the solar cell can be doubled. The principle is shown in Figure 1. This method was first used for heating materials or welding, and only recently has it been used to prepare concentrating solar cells. The focal surface characteristics are expressed by the ratio of the lens surface D to the light-receiving surface d as the concentration degree C, where d is determined by the dispersion angle 0, that is, d=2fsin2θ, and the concentration degree C=D/d=D/2fsin2θ is determined by the focal surface Depth h, focal length f and spot diameter d are determined.

3. Solar tracking test
The output characteristics and energy of solar energy are related to the seasonal time and climate of the area, and another common factor is the incident angle of the sun. Research shows that the incident angle has little effect on the output voltage, but has a great impact on the output current and power. The research group has developed a solar tracking device that uses a single-chip microcomputer to control the rotation and inclination in time, as shown in Figure 3(a). The relationship between the measured current and the inclination angle is shown in Figure 3(b), which can obtain the influence of different seasons and incident angles on the power and the effect of tracking to increase the power. This device can also be used for low-power solar working machines to increase the power usage.

(1) Ordinary parabolic lens. The concentrating solar cell in Figure 2 is composed of a number of parabolic lenses in Figure 4(a). This concentrating solar cell has high concentration and high requirements on the angle of incidence. It must be matched with the sun device, and its mass and volume are large. The heat dissipation and cooling requirements are high, so it is difficult to use in vehicles. The following types are fixed and suitable for vehicles.
(2) Thin Fresnel lens. There are two types, straight and curved, as shown in Figure 4 (b) and (c). The structure is simple, light and thin, and it can be die-casted with plastics with good optical properties (such as polypropylene). If an additional aluminum plating process is added, a thin-film Fresnel reflective lens can be made. If the thin Fresnel lens is then thermomechanically bent to form a curved thin Fresnel lens, its cross-section is inclined inward compared to a flat thin Fresnel lens, and the reflection loss is less.
(3) Planar enhanced condenser. The structure of the plane-enhanced condenser shown in Figure 4(d) is relatively simple, and the output power can be increased by about 50%.
(4) Parabolic trough lens. Figure 4(e) shows the parabolic trough lens. It is a parabolic trough structure with silver-plated, polished aluminum or aluminum-plated film that can be wound around. It is a uniaxial tracking one-dimensional concentrator. The length is laid flat along the north-south direction or inclined to the south, and its inclination angle can be fixed or adjusted manually by day and season. Foreign application examples: 240kW system size is 2.1×6m, concentration degree is 42; 100kW system size is 2.1×9.1m, concentration degree is 34. It can be seen from this that, compared with the size and area of ​​general solar cells, it is much smaller, and it is very suitable for vehicles.

December 16, 2021 by admin Analysis and Application of Solar Energy Characteristics