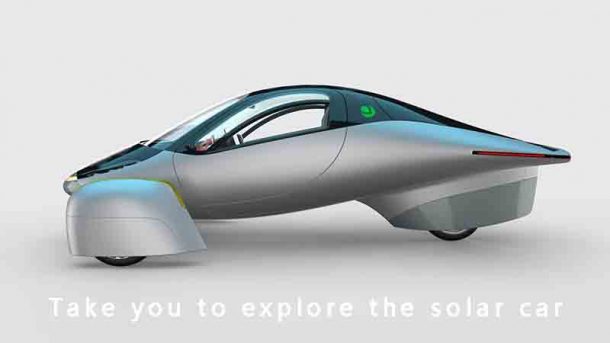 At present, solar electric vehicles are still in the early stage of research and development, and there are occasional reports that they are mostly modified by adding solar panels to existing vehicles. This method can be applied to various vehicles at the beginning and is relatively easy to implement. Its effect is similar to that of the vehicle body. It is related to the facing area, so it is more effective for vehicles with lower speed, lower power and larger facing area. Generally, due to the high speed of the car, the face of the car body is small. In most cases, the solar energy cannot be used as the main power, and can only be used to charge the battery to prolong its continuation time and improve its operating state to prolong its life.

(1) Examples from abroad
The solar car is a long-term dream pursued by Chinese and foreign explorers. In 1982, Australians Hans and Parkin made a “silent finisher” solar car with fiberglass and aluminum. The top of the car was equipped with solar cells to charge two batteries to drive the motor to run the car. On December 19 of that year, the two drove the car from Perth on the west coast of Australia, across the Australian mainland, and arrived in Sydney on the east coast on January 7, 1983, achieving a great pioneering work.

On December 7, 2009, according to foreign media reports, Swiss adventurer Louis Palmer drove a solar-powered car to complete the feat of circling the earth 32,000 miles (52,000 kilometers) without a drop of oil. Palmer spent 17 months traveling 38 countries with an all-solar vehicle developed with the help of Swiss scientists. The two-seater’s battery is fully charged and can cover 185 miles (300km) at a top speed of 55mph (90km/h). A prototype of Louis Palmer’s car made of aluminum and fiberglass is shown in Figure 1(a). It features light weight, high efficiency, and is powered by trailer-borne solar cells.

(2) Examples from China. In the early days, Tsinghua University and Shanghai Jiaotong University also developed low-speed solar electric vehicles. Recently, an engineer used a small station wagon to add solar panels on the roof to convert it into a solar-powered leisure sightseeing vehicle, as shown in Figure 1(b). Install karaoke and other equipment in the car, where you can go and play. Another secondary school student built a solar car for several media reports; a farmer built a solar car; an engineer from Xi’an developed an electric car powered by wind and photovoltaics. It can be seen from this that people’s dream of realizing solar vehicles is very strong, but research and development is very difficult. The development plan of new energy vehicles in the automotive industry will only develop pure electric vehicles, plug-in vehicles, hybrid vehicles and hydrogen fuel vehicles by 2020. , that solar cars are still decades away.

(1) Characteristics of solar racing cars
The earliest solar racing cars developed abroad are shown in Figure 2. Since the solar racing cars need to run fast and have a long battery life, a large area of ​​solar cell modules need to be arranged on the roof, requiring large unit energy and light weight, and at the same time the battery The capacity should also be large and the weight should be light (about 290kg). Generally, it is a single seat, and the body is made of composite materials. The structure and shape of the two racing cars in the picture minimize the wind resistance. The dimensions and quality of the two cars are similar. It is estimated that the shell materials used in the two cars, the type of solar panels, the output power per unit area, and the storage capacity and power per unit mass of the battery are estimated. are relatively close. From this, it can be estimated that the output power of the solar cell is 150W/m², and the peak power is about 1200W; the capacity per unit mass of the battery is 166A·h/kg, and the total capacity is 5kW·h. If matched with the solar peak power, the energy storage per unit mass of the battery is 150W/kg. In fact, solar racing is not only a race for racers, but also a race for solar materials, components and car body materials and their manufacturing processes.

(2) Analysis of solar racing cars. ①The use of solar energy is time-sensitive, and a corresponding battery must be equipped for continuous use. ②The power of solar energy is related to the area of ​​the solar panel. ③ The solar energy application of high-power vehicles must rely on the combination of high-tech solar panels with high conversion rate and high output energy density, high-power and low-quality batteries, light vehicle body structure and low operating resistance. The achievements in this area will promote the development of new materials, new structures, new equipment and new processes for the equipment of solar electric vehicles, automobiles, high-speed trains and other vehicles.

Two solar cars recently developed abroad are shown in Figure 3. The features of both cars are the use of carbon fiber and aluminum alloy lightweight materials, and solar panels are laid with the largest body area to increase the speed or mileage.

(1) Australian solar car
On August 23, 2015, the solar-powered supercar developed by EVX, an electric vehicle company in Melbourne, Australia, is shown in Figure 3(a). It takes 7s; the maximum speed can reach 150km/h, and the roof is equipped with a solar panel with an area of ​​7m². It is reported that in sunny conditions, the car can drive without interruption as long as the speed is controlled.

(2) Dutch solar car
On July 24, 2015, TrendForce reported that the solar car developed by the Netherlands is shown in Figure 3(b). It is covered with 5.8m² solar panels, which can charge the 15kW·h battery in the car, and the maximum speed can reach 125km/h. On a sunny day with a full charge, it can travel 1000km.