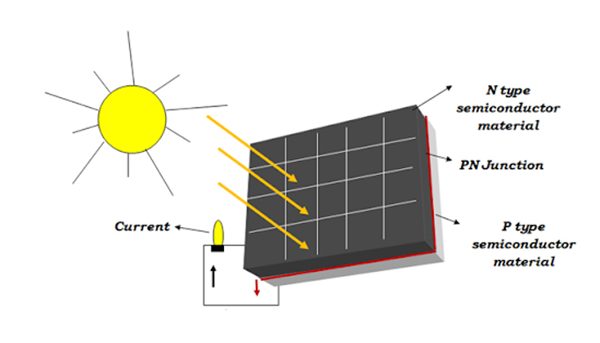 Variation Law of Photovoltaic Characteristics
The process and main results of the numerical simulation of the change law of photovoltaic characteristics are as follows:
(1) Mathematical model establishment and numerical simulation.
According to the aforementioned equivalent circuit and U-I relational formula, a mathematical model can be established as shown in Figure 1. Using this model to simulate the photovoltaic characteristics of 300W solar panels, the results are shown in Figure 2.

(2) The influence of light intensity and ambient temperature on U-I and P-U
It can be seen from Figure 2(a) that when T, n, and i are all standard values ​​and G=1000W/m², the peak power of the photovoltaic cell used is 300W, the peak current is about 8.3A, and the voltage when the peak power is reached It is 36V, which is very close to the technical parameters provided by the manufacturer, which verifies the accuracy of the constructed test model. At the same time, both the output power and working current decrease with the decrease of light intensity (G), but the open-circuit voltage and short-circuit current remain unchanged. It can be seen from Figure 2(b) that within the nominal operating condition of 30V/10A, the temperature effect is minimal. As T increases, the short-circuit current does not change, and the open circuit voltage, operating voltage, operating current and output power decrease very little. . It can be seen that the influence of light intensity on the output characteristics of photovoltaic cells is much greater than that of ambient temperature.

(6) Calculation of power generation.
According to the results of the timely tracking test in Figure 5, integration can be used to estimate the total daily average power generation of the panel under different load voltages. The formula is as follows
W single block=∫240Po(W)dt≈0.8kW·h
If a total of 34 battery panels of the same type are installed on a construction vehicle, the average daily power generation capacity is about 27.2kW·h.

November 5, 2021 by admin Analysis and Application of Solar Energy Characteristics