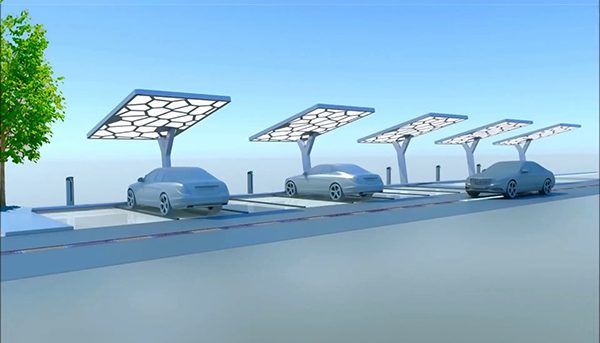 (1) Promote mass entrepreneurship and innovation, and apply distributed solar power stations to various occasions. Small solar home appliances and vehicles are the daily necessities of the people. The development of solar home appliances such as cooking utensils, heating and cooling equipment, refrigerators, air conditioners, and small and micro vehicles (scooters and small vehicles), etc., requires little investment, not difficult technology, and has a wide range of applications. Once the use of solar energy, the effect of energy saving and emission reduction is very significant. Using 1kW of solar power is equivalent to reducing CO2,540kg/year and saving 729L/year, which is converted into an increase in forest area of ​​5544m².

(2) Research, develop and promote mobile solar-powered electric vehicles and engineering vehicles. At present, all localities mainly produce and use fuel vehicles with serious pollution. It is recommended that the automobile industry transform to produce new energy pure electric vehicles as soon as possible, and establish solar charging stations. The research, development and production of solar vehicles should be accelerated. Vehicle batteries can be charged by on-board solar power at any time, which not only greatly increases the driving mileage, but also improves the battery operation and prolongs its service life. Mobile solar power has less geographic impact and can be promoted vigorously, especially in places with insufficient power and sufficient sunlight. The market for solar-powered electric vehicles and engineering vehicles is very broad.

(3) Establish solar charging stations. New energy bus charging 10,000 kWh can reduce carbon emissions by 100,000 tons. The site area of ​​the station is 50906.32m², with 206 charging parking spaces, including 8 bus charging box-type substations and 206 charging piles. The former is composed of a high-voltage transformer room and a low-voltage room, which converts the 10kV high voltage into 380V alternating current, and then converts it into direct current through the charging module to charge the bus. Shuangliu currently has 770 buses, most of which are CNG vehicles. Compared with fuel vehicles, they are energy-efficient and have low emissions, but still have certain pollutant emissions. Shuangliu Interchange Bus Company will use 320 pure electric vehicles. Replace existing vehicles. For example, to build a solar bus charging station with the same area as mentioned above, the site area is also 50906.32m², and the steel frame is arranged with solar panels of the same area as the roof. The output power can reach 7000kW, and it can generate 35000kW·h/day on sunny days. Chengdu’s five types of solar energy resource-poor regions have an annual average of 1,200 hours of sunshine and annual power generation of 8.4 million kilowatt-hours. With an average of 23,000 kilowatt-hours per day, 150 buses can be fully charged, and no electricity charges will be paid for 25 years of use. While building the solar charging station, you can get 50906.32m² of site houses without occupying the land, which can do two things with one stone, which can greatly improve the overall benefits of the station. The charging station can be charged directly, or it can be replaced with a full battery. The main problem of solar power generation is to generate electricity only when there is sunlight. Therefore, independent off-grid power stations must use enough batteries to store solar energy for night and rainy days. The grid-connected method can be adopted when the mains power permits. It is only necessary to connect the DC output of the solar energy to the same voltage as the grid voltage through the grid-connected inverter and connect to the grid in parallel. , The remaining and the shortcomings complement each other, the peak is flat and the valley is filled, no battery and inverter are needed, and the construction cost is reduced by 1/3.

(4) Establish and develop solar mobile power and rechargeable vehicles. The research team developed a containerized off-grid solar power station with a volume of 4×2×2m and a solar power output of 4.5kW. It can be used as a household charging station. The car enters the box at night and uses the battery to charge slowly for a long time, and it uses solar energy during the day. The board is used to charge and store the battery. It can also provide parking spaces to quickly recharge other electric vehicles. At the same time, the capacity of the station is also sufficient for a family’s own use. Increase the forest area by 24948m². The station can also be mounted on an electric flat car to become a vehicle-mounted power supply car and charging car. It can be equipped with more battery packs for charging, charging electric cars or directly replacing the battery, and it can also provide on-site service.

(5) Develop rail transit and solar rail transit. Compared with road traffic, rail transit has less operational resistance, less power, fast speed, and high safety. It has already passed the coal-fired and fuel-powered stage and entered the era of electricity. It is more suitable for rapid development into solar-powered electric railcars, which saves energy and reduces energy consumption. The row effect is great.

The transformation of a new energy vehicle from a petrol car to a tram to a solar battery is a new energy revolution in the field of transportation. Solar energy has a wide range of applications and is closely related to people’s lives. It can be large or small, conducive to “double innovation”, improving and enhancing people’s quality of life, developing supply-side demand industrial structural reforms, and promoting the energy revolution of the entire society.