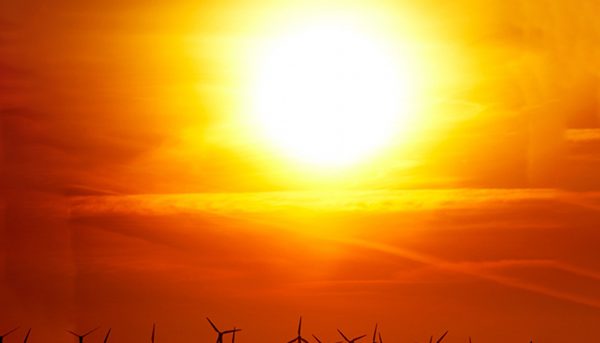 The sun is a huge sphere made of hot gas, with a center temperature of about 107K and a surface temperature of 5000K. Its interior is constantly undergoing thermonuclear reactions, producing huge amounts of energy. Only one part of 2.2 billion radiates to the earth, which is reflected and scattered by the atmosphere. And absorption, about 70% of it reaches the ground, and the available energy is about 1.8×1018kW·h, which is equivalent to 130×106 million tons of standard coal, which is equivalent to 10,000 times the world’s proven reserves of major energy sources. Due to the earth’s rotation and revolution of the sun, the distance between the two is changed, and the radiation intensity is different in different regions and spring, summer, autumn and winter. It can be seen from Figure 1 that among all renewable energy, only solar energy is an inexhaustible new energy source. The core problem of solar energy utilization is how to solve the difference in the distance of the earth relative to the sun and the direction of sunlight, and the intensity of sunlight varies with many factors.

Solar energy is the source of the survival of all things. The growth of all things depends on the electro-photosynthetic chemical effect of absorbing solar energy. The changes of the four seasons depend on the temperature difference caused by the different intensity of radiant heat when the earth and the sun move relative to each other. Solar energy is inseparable for human food, shelter, transportation and social development. During the Western Zhou Dynasty, Chinese ancestors began to use concentrated light to make fire, and then people used concentrated heat to heat objects, which made society progress from the Stone Age to the Bronze Age and Iron Age. Turning heat energy into kinetic energy to drive tools and machinery is widely used in various sectors of industry. Taking transportation equipment as an example, it has developed from rickshaws to steam vehicles, internal combustion vehicles and electric vehicles. Nowadays, people are inseparable from electricity for study, life and work. The higher the quality of life and the more developed the industry, the greater the electricity consumption. The current electricity structure is mainly based on coal, oil and gas power generation. With the increasing demand for energy, energy materials are increasingly depleted, and a large amount of waste gas emissions will also be generated, causing air pollution and generating greenhouse gases, which affect the national economy. sustainable development. Therefore, energy conservation, emission reduction and the widespread use of renewable energy have become a top priority. Among the renewable energy sources, only solar energy is an inexhaustible, zero-pollution clean energy. Therefore, the 21st century must be the era of human energy revolution.