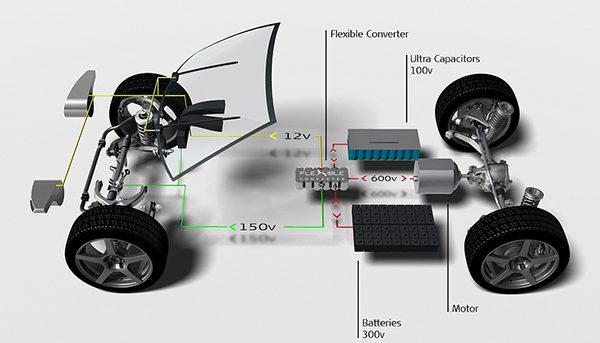 1. Low speed low power car
What is discussed here is a low-speed and low-power car with a speed within 10km/h and a motor within 1kW, generally referring to wheelchairs and scooters used by the elderly.

(1) The main power parameters of low-speed and low-power cars are shown in Figure 1. It can be seen from the figure that the parameters of the electric wheelchair and the scooter are roughly similar. For these products in the figure, the motor power and battery capacity of the wheelchair are slightly larger than those of the scooter. Except for special wheelchairs, the parameters of the wheelchair will generally not exceed this range. The scooter may be very different, such as EW32 and ES31, the speed and motor power increase not much, but the battery capacity increases a lot, and the cruising range also increases a lot. There are many types of scooters, and many scooters have a power greater than 1kW, and the speed can reach the speed of a bicycle or even a motorcycle.

(2) Variation law of main dynamic parameters of low-speed and low-power cars. The comparison of the two cars in order of power is shown in Figure 2. Nos. 1 to 5, the speed of the car seat is 6km/ h, and the motor power increases with the increase of the dead weight (the load is 1 person), but the increase is not large; from the serial number 6, the speed increase is not too big, but the car The weight has increased Rapidly, the motor power and battery capacity have also increased rapidly, and the cruising range has also increased.

2. Medium-speed and medium-power cars
Generally, electric cars with a running speed of 20~60km/h and a power of less than 10kW are classified as medium-speed and medium-power cars. These types of cars are widely used and have become popular. They are produced by many manufacturers and have more and more complete data. . However, except for a very small number of solar electric scooters being developed and produced, most of the widely used electric cars and special cars have not yet seen the advent of solar cars.

(1) Data collection and analysis of typical medium-speed and medium-power cars. The main technical parameters of typical medium-speed and medium-power cars are shown in Figure 3, including small electric trucks, patrol cars, fire trucks, sightseeing cars and golf carts. The car speed is mostly 25~30km/h. around 4kW. Because of the research and development of solar electric cars based on this type of car, the body area is added to the parameters, which is the basic parameter for designing and arranging solar panels. The parameters of half-ton truck, 4-person patrol car, 4-person fire truck, 4/6-person sightseeing car and 4-person golf cart are very similar, so as long as the car weight and speed are fixed, the power can be determined. It can increase the speed and increase the load capacity, so the lightweight of the car body is the key to increasing the load. The battery capacity and continuation mileage are not listed in the comparison . In fact, increasing the battery capacity can inc rease the continuation mileage, but at the same time, it will also increase the weight of the car body. Therefore, the weight of the car not only requires the lightweight of the car body, but also the lightness of the battery. Quantization, the lightweight of solar panels also needs to be considered for solar cars. The integration of car body and energy device materials is the development direction of lightweight. The ideal solution is to research and develop solar electric cars with new energy, new materials, new devices, new structures and new processes.

(2) Research on the main technical parameters of typical medium-speed and medium-power cars and their changing laws. The main technical parameters of a typical medium-speed and medium-power car are arranged in the order of increasing motor power by car type and compared as shown in Figure 4 (the value of the car speed in the figure must be multiplied by 2 to obtain the car speed). The common law of its changes is: ①The speed of patrol cars and golf carts remains the same, while the speed of sightseeing cars and fire-fighting cars changes very little. ②The power of the motor increases with the increase of the number of people on board. Since the power demand is not large, it is easier to achieve a reasonable match with the on-board solar energy than the general high-speed car. ③ The total weight of the car increases with the increase of the number of people carried. At present, these cars are all steel bodies, which have great potential for light weight. ④The length of the car and the p lane area of ​​​​the body increase with the number of people carried, and the roof of the car is straighter than that of a passenger car, which is convenient for laying solar panels. ⑤ Electric cars have been popularized in such cars, and low -voltage DC motors are often used, so it is easier to transform into solar electric cars.

(3) Analyze the changing law from the technical parameters of the series of tourist cars. See Figure 5 for the analysis and change rule of the technical parameters of the tourist car series. Tourist car is a kind of medium-speed and medium-power passenger car with the most widely used power and the largest change in passenger capacity among the several types of electric cars discussed. , and several other parameters are proportional to the number of people, among which power and body area grow faster. In a car with a large number of passengers, the length of the car does not change, but the car body area is increased by increasing the car width. For example, a 5m×l.6m car can be extended by 0.5m to increase the car body area by 0.8m², while changing the car body area can be increased by 0.5m. The body area can be increased by 0.8m² by increasing the width of the car by 160mm. Therefore, the development of wide-body cars is an important way to increase the load capacity, and it is also an important way to develop solar electric cars to increase the output capacity. It can also be seen from the figure that the increase rate of the car body area is greater than the increase rate of the car length and car weight, and slightly greater than the increase rate of the motor power, which is more favorable for the development of solar cars.

(4) Development of medium-speed and medium-power cars. According to the above analysis, if new materials, new devices, new structures and new energy sources are used to develop solar electric cars, it is possible to increase the speed of cars to meet the requirements of 40~60km/h for urban short-distance passenger and freight and buses without increasing car costs. Mains charging.

3. High-speed and high-power solar electric cars
At present, high-speed and high-power cars are mainly produced and used, such as a large number of family cars, long-distance passenger trucks, and various engineering cars. Even 100kW. The vast majority of cars of this type are fuel cars, and the current production and ownership are still growing at a rate of more than ten percent.

(1) Difficulties in developing high-speed and high-power solar electric cars.
Family cars: Around 2010, a number of manufacturers in various countries have launched family electric cars, as shown in Figure 6(a). Most of them are converted from fuel cars. The curb weight of the cars is basically above 1t, and the technical parameters are basically similar. There are also several electric cars with similar parameters in China. The comparison of their bases is shown in Figure 6(b). It can be seen from the figure that JAC has the best parameters and has been put into production in large quantities. At the same time, there are also several sedans that have launched lightweight car bodies. The curb weight has dropped to about 0.5t, and the speed can reach 100~120km/h. The world’s most high-end electric car is Tesla in the United States, which has been put into mass production, but the price is too expensive. There have been many production of small and micro solar electric cars with low and medium speed kilowatts for household use. However, such cars encounter major p robles when driving on the road. If they can be solved, the use time of a large number of high-speed and high-power cars will be reduced. The difficulty in the development of high-speed and high-power solar cars is that it is difficult to provide high-power solar energy due to high speed, great wind resistance, large power demand, small roof area and complex shape. Recently, several concept cars have been equipped with a 6.6m² thin-film battery on the roof and a 50kW·h lithium battery, which can achieve a power output of 160kW and a top speed of 200km/h for a continuation of 350km, which brings hope to the development of solar electric cars.

(2) Large passenger cars.
Large-scale solar buses have been rolled off at two factories in Heilongjiang and Nanjing, but the information is incomplete. According to the roof area and the solar panels used, it is speculated that solar energy can only play an auxiliary delay role. It is It is feasible to use it on buses with lower speed. Because of its long body and flat top surface, it is more suitable for the development of solar electric cars than family cars.