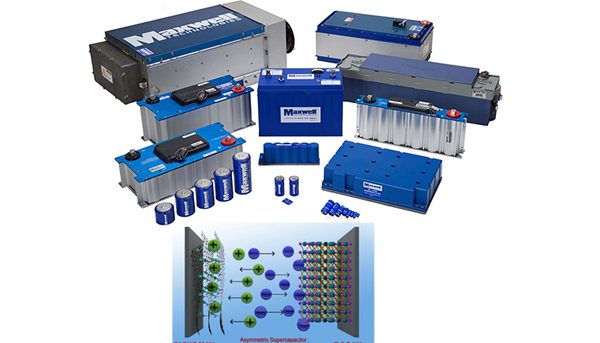 1. New energy storage device-super capacitor battery
(1) The principle and structure of supercapacitors. A supercapacitor is an electric double-layer capacitor that stores energy through a polarized electrolyte. There is no chemical reaction in the process of energy storage, which can be regarded as two non-reactive porous electrode plates suspended in the electrolyte. When electricity is applied to the electrode plates, the positive plate attracts the negative ions in the electrolyte, and the negative plate attracts the positive ions to form The principle and structure of two capacitive storage layers separated near the opposite polar plates are shown in Figure 1. Because the distance between the two charge layers is very small (generally less than 0.5mm), coupled with the use of a special electrode structure, the electrode surface area has increased tens of thousands of times. This energy storage process is reversible and can be repeatedly charged and discharged hundreds of thousands of times. Since the close charge layer spacing is much smaller than the distance between the charge layers of ordinary capacitors, it has a larger capacity than ordinary capacitors. Therefore, supercapacitors have both capacitance and battery characteristics. Compared with aluminum electrolytic capacitors, super capacitors have larger internal resistance, so they can be charged directly without load resistance. If over-voltage charging occurs, the electric double-layer capacitor will open circuit without damaging the device and can be charged without current limit. .

(3) Types and main parameters of super capacitors. Supercapacitors have different technical parameters according to different electrode configurations, and there are two types of inorganic materials and organic materials. Like the lithium battery, it is also a component with a certain voltage and capacity composed of single components in series and parallel.

2. Super capacitor composite battery
(1) Basic components. This kind of battery has the characteristics of high specific energy of lithium battery and high specific power of super capacitor, which is very advantageous when used as a high-power vehicle. Hybrid supercapacitor batteries can be in various combinations. These basic components are connected in series and parallel to form a high-power hybrid supercapacitor component for vehicles with a certain voltage, current, and power, as shown in Figure 3.

(3) The development of storage batteries. The preparation of the supercapacitor electrode adopts a macroporous structure, which can improve the charging speed and unit capacitance of the supercapacitor, and the sponge has more uniform pores. Connected with cellulose or polyester fibers, and continuous coating of nanomaterials increases the absorption capacity of electrons, which can increase the specific power of the battery. Recently, many companies have developed a new type of battery by taking advantage of the rapid and massive shuttle movement of lithium ions between the graphene surface and the electrodes. This new battery can compress several hours of charging time to less than one minute, thereby also promoting the innovation of the new energy automobile industry. From a microscopic point of view, the charging and discharging process of a battery is actually a process in which cations are “embedded” and “detached” in the electrode. Therefore, if there are more holes in the electrode material, the process proceeds more quickly. From a macro perspective, it shows that the faster the battery charge and discharge. From this perspective, graphene is undoubtedly a very ideal electrode material, so graphene solar cells and storage batteries are the direction of development.