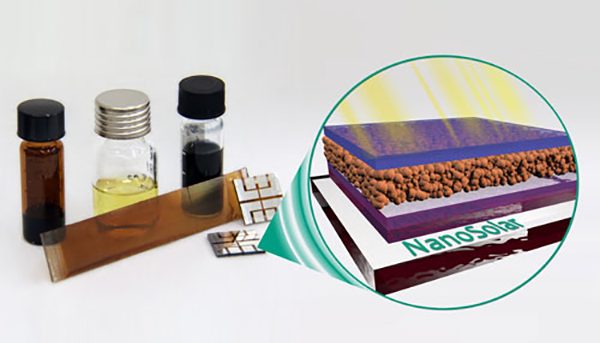 The structure principle of nanocrystalline titanium dioxide (TiO2) thin-film solar cells is shown in Figure 1. It can be seen from the figure that the conductive glass TCO with a conductive film is coated with multiple layers of different nano-level large energy gap semiconductor materials TiO2 as the photoelectrode, and organic compound sensitizing dyes such as transition metal Ru and Os are used. Organic solvents or colloids with redox effect are electrolytes to compose solar thin-film batteries. When absorbing sunlight, electrons transition from the ground state to the excited state. The holes left by the lost electrons in the dye are quickly compensated from the electrolyte; the electrons finally enter the counter electrode composed of platinum conductive film (Pt) or porous carbon electrode, and then generate a photocurrent through an external circuit. The particle size of nano titanium dioxide and the microstructure of the film have a great influence on the photoelectric performance. The chemical bond between the sensitizer and the semiconductor surface not only enables the sensitizer to be firmly adsorbed on the surface, but also enhances electronic coupling and changes the surface state energy, which is conducive to the transfer of charges. The porous nature of the nanomembrane makes its specific surface area farther. It is larger than its geometric area, which greatly improves its surface adsorption capacity, which is beneficial to dye molecules and absorbs sunlight, and at the same time improves the photoelectric quantum efficiency. In addition, the small particle size of nano-titanium dioxide will also cause its large specific surface area, but at the same time the pore size of its electrode will become smaller. In general, the larger the surface area, the greater the adsorption capacity, the more dye molecules are adsorbed, and the stronger the photocurrent. The advantage of nanocrystalline titanium dioxide (TiO2) thin-film solar cells lies in its low cost, simple process and stable performance, and has become a strong competitor of traditional solar cells. Compared with silicon solar cells, it has the following advantages: ① It can be made into a transparent product, and can also be prepared on a flexible substrate, which expands the scope of application and can be used under various lighting conditions; ② It is not sensitive to the incident angle of light, It can make full use of refracted and reflected light; ③Wide operating temperature, up to 70C; ④Simplify the manufacturing process and save energy; ⑤The cost of nanocrystalline titanium dioxide solar cells is about 1/5~1/10 of monocrystalline silicon. Its theoretical light-electric conversion efficiency can reach 30% (the current efficiency is low), and the service life can reach more than 20 years.

Nano-quantization is to make the crystal size nanometer, the particle size is nanometer, the wavelength of electron movement is centimeter level, there is no thick potential barrier layer around the particle, and the wavelength of light that can be absorbed is from ultraviolet to near infrared, which can greatly improve the photoelectric conversion efficiency. . The longer energy buffer time can lay the foundation for the development of multi-energy belt and thermoelectric solar cells. It can form a three-dimensional super crystal structure, which is different from the single energy band of the PN junction. There are multiple micro energy bands that absorb light energy multiple times during the photon movement process, which can greatly improve the light-to-electric conversion efficiency.

December 13, 2021 by admin Analysis and Application of Solar Energy Characteristics